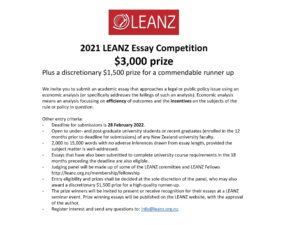 LEANZ received 24 entries to the essay competition in 2020, a record number of entries. The standard at the top end of the submissions was very high.

The winning entry was Nathan Tse for his essay Decentralised Autonomous Organisations and the Corporate Form. This essay examined the role of decentralised autonomous organisations (DAOs) and asked whether DAOs really improve the corporate form. DAOs ostensibly eliminate agency costs due to the absence of a board of directors, automated governance mechanisms and transparency provided by the blockchain upon which the DAO is launched. Nathan’s analysis suggested several practical and legal obstacles that technological advancements and improved engineering must overcome before DAOs become a viable, mainstream organisational structure. Balancing the inevitable improvement in technology against these significant obstacles, this article predicts an incremental integration of DAOs into society through a hybrid approach, involving interim legal solutions and varying degrees of automation and decentralisation.

Runner up was Chanelle Duley, Democracy or Technocracy?: Policy Delegation and Populism? This paper identifies the incentives faced by elected and appointed policymakers and compares the efficiency of each policymaker’s performance under such incentives.

With thanks to Bryce Wilkinson, Lew Evans, George Barker and Bronwyn Howell for acting as judges. LEANZ is thrilled to announce the winners of the 2019 LEANZ essay competition:

Thanks to the judging panel of LEANZ Fellows and committee members:

Pictures from the prize-giving event prior to the 4 September 2019 Wellington seminar at Chapman Tripp:

The Law and Economics Association of New Zealand, Inc. (LEANZ) is pleased to announce the winner and commendable runner up of the inaugural LEANZ Essay Competition.

The discretionary prize for a commendable runner-up prize of $1,500 was awarded to

The competition was open to current or recent under- or post-graduate New Zealand university students of any discipline. Entries closed on 7 May 2018. The original full entry criteria and information here. Please keep an eye out for announcements for the 2019 LEANZ Essay Competition.

A C W Maughan Scholarship, funded by members of LEANZ, is awarded to Richard Davidson of Wellington who is to read for an LLM at Toronto.
LEANZ is delighted to be able to assist two candidates of such excellent calibre and looks forward to their future contributions to law and economics in New Zealand.

The Law and Economics Association of New Zealand today expresses its sadness at the death its inaugural Patron Sir Ivor Richardson.

The Association’s tribute to Sir Ivor is here.

Sir Ivor provided a characteristically careful and acute introductory address to the LEANZ Symposium on 16 September 2014 which is re-published here.

The Law and Economics Association of New Zealand (LEANZ) wishes to give notice to its members of its 2012 Annual General Meeting.

The conference will now be held on the 28th & 29th of May at the InterContinental in Wellington.

LEANZ is now on Facebook! Search “Law and Economics Association New Zealand” and add us as a friend. The page contains updates, discussions and links to items of interest.

The Patron of the Law and Economics Association of New Zealand, Sir Ivor Richardson, former President of the Court of Appeal, presented Matthew Palmer, Deputy Solicitor-General (Public Law) with the certificate recording his admission as a Fellow of the Association at the Annual General Meeting of the Association on 28 June.

The prime requirement for Fellowship is the publication of at least 100,000 words which advance the study or understanding of law and economics issues in or with reference to New Zealand. Fellows may use the post-nominal LEANZF. Matthew Palmer has published a number of papers on ex-socialist economies and also written on economic analysis of constitutional institutions. Matthew Palmer was the founding Secretary of the Association in 1994.

Professor Lew Evans, LEANZ Fellow, has been appointed an ONZM in the New Years Honours List for services to education.

LEANZ recently held its Annual General Meeting on the 28th of June, 2011. The AGM was hosted by Russel McVeagh, with a video link to Auckland. After the AGM, Dr Russell Norman MP and Dr Jason Potts (University of Queensland) debated the utility of Happiness Indexes.